I used to work at Just Like That, a youth magazine owned by the Times Of India Group. While there, I wrote many, many stories on a vast variety of subjects. I recently found a few pieces I had written in the early 2000s. They’re terrible. Such tripe. I’m glad I recognize them for what they are, Â but I’m also ashamed that they’re so terrible. Really, they stink. Like days-old beef. 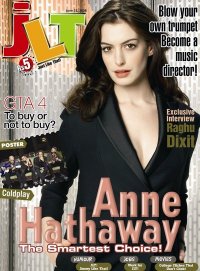 Because I’m such a nice guy and because I can laugh at myself, I’m going to be reposting a few over the next couple of weeks. Enjoy. And be kind. At least I don’t write / think that way any more. This latest one also displays myÂ misogyny! Bonus!

It never fails, especially after a breakup â€“ to make yourself feel better, if youâ€™re a guy, go look up an old flame. It doesnâ€™t quite work on the same level as chocolates and ice cream and shopping do for women, but it comes close. For one thing, the same level of guilty pleasure is involved. Also, thereâ€™s a reasonably good chance of getting action, which is a plus in any manâ€™s book.

What most women donâ€™t get, however, is why the ex is such a factor in the first place. Why do guys instinctively turn to something theyâ€™ve already had? You could get action (and, presumably, other sorts of gratification as well) from any woman. Why do guys naturally gravitate towards ex girlfriends when it comes to soothing the wounded heart? Well, thereâ€™s a bunch of reasons:

First of all, thereâ€™s the obvious â€“ you know sheâ€™ll give you some because she has in the past. When youâ€™re in that post-relationship vulnerable phase, you canâ€™t really deal with rejection too well. So going and hitting on random women who will probably turn you down has significantly less appeal than going for someone you know has sullied themselves with you at some point.

A lot of guys also actually like the comfort and closeness that an ex brings. Itâ€™s almost like still being in a relationship, despite being single. This is because each person knows the other well and knows what to do to turn them on or soothe them down. That awkward learning phase isnâ€™t really a factor, which is also good post-breakup â€“ the last thing you need is to deal with someone new, or learn the dynamics of a new person.

Of course, there will always be some resentment, residual emotion and unresolved conflict from a past relationship, so when youâ€™re with an ex, the pre-requisite of drama is also automatically fulfilled. Rather than have a calm, sober, almost bloodless temporary fling with some total stranger, a tempestuous, torrid affair with an ex seems way more attractive.

Thereâ€™s also a lot of comfort to be taken from the fact that most exes are happy to oblige. After all, theyâ€™re people too, and have needs and are curious about, â€œhow things might have turned out if we hadnâ€™t broken up.â€ This means that the minute you call them, you have their attention. Guys love attention. Itâ€™s like a magnet to iron filings. This ties in directly with the first point I made. Not only are ex girlfriends easier to approach, they actually want you to approach them. Only a moron would not take the offer up.

Lest you think all guys are perverted a-holes without a shred of common decency, and if youâ€™re fed up with having your worst fears about guys realised, hereâ€™s a ray of hope. Most relationships with exes rarely pan out into something significant. The same reasons that bring an ex couple back together also work against them. The conflict and tension that causes the attraction has a very real base. Ultimately, unless some serious changes have been made, couples that get back together after a relationship has ended invariably remember why it ended in the first place. At best, a fling with an ex is a short-lived thing.

There are also some serious opportunities to seeing your recently broken up man with an ex. You know he hasnâ€™t gotten over you yet â€“ if he had, heâ€™d be out chasing some real tail instead of the easy game. Also, thereâ€™s probably going to be a point when they donâ€™t make it (thatâ€™s IF something more concrete than mere attraction happens in the first place) and that leaves a door open to you. (Only if you want him, of course!)

Just remember that when you think seriously about inviting him back into your life, youâ€™re fulfilling the exact same behaviour that you loathe in him!