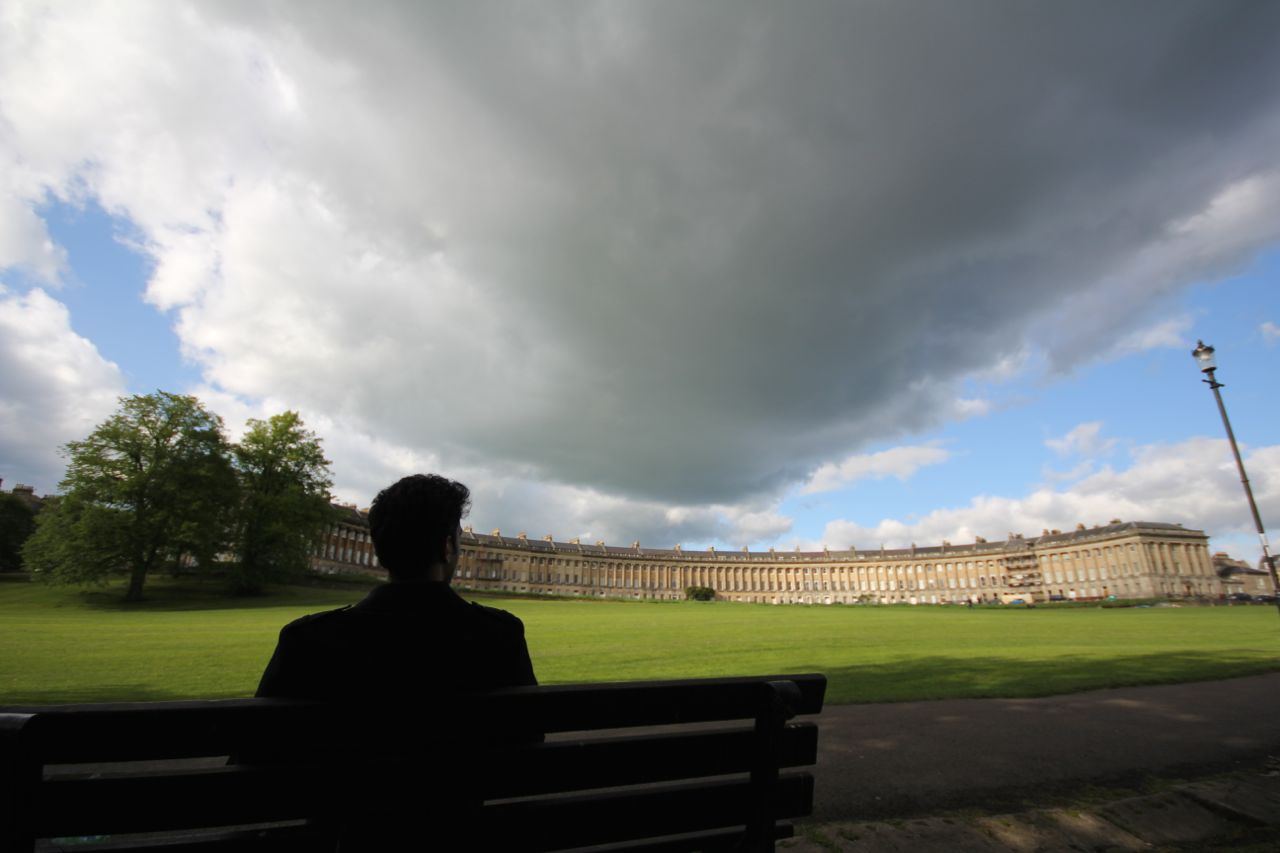 It’s so easy to do a day trip in the UK – it’s literally as easy as deciding the night before and doing 45 minutes’ research on train timings. On my last day in Gloucester my brother and I decided to go off and spend some time in Bath.

Bath is a small town with some extremely interesting and ancient roots. The Romans founded the town and created the baths and a temple (the baths are still around and can still be visited.) We arrived after lunch and just in time to do a lot of walking about. The town itself is extremely pretty. Most of the buildings are made from the local Bath stone, in a lovely Georgian style. The little cobble-stoned lanes and alleys tempt tourists into rambling about, in a maze of quaintness.

We wanted to see a couple of the sights – the first of which was Bath Abbey – it’s highly impressive because the front has a very dramatic set of sculptures, showing angels ascending into heaven – along stone ladders set into the face of the Abbey itself. You really need to see the pictures below to get a (highly reduced) sense of the grandeur of the scene. The Abbey, unlike Gloucester Cathedral was in a very festive mood as the Bath Music Festival was on at the time. Inside the Abbey, choirboys (and girls) were playing music and singing. Rather than a place of quiet reflection, it seemed to be the venue for an intimate performance.

Not that Bath Abbey isn’t appropriately devout. It has a wonderful sepulchral feel to it. An almost-eerie shiver runs down your spine when your eyes trace over the stone plaque commemorating the people who have been in charge of this stone building – all the way back to 600 AD. You get a true sense of age in the Abbey and in the baths next door.

The whole town exudes a ‘lost-in-time’ feel, as though there’s a bubble of spacetime that’s been pinched off and tied away, with everything inside ageing far slower than the surrounding universe.

We walked along some of the streets, getting lost in the alleyways, on our way to the Royal Crescent – a set of 13 apartment blocks set in the aforementioned unimaginatively named crescent. From a point on the lawns one can see the entire crescent spread out. It’s a place built for panorama mode on one’s camera. And I did not disappoint the builders. (Although they probably died before photography was a thing.)

On the way back from the Crescent to Bath station, we decided to sample some local ales, another of Bath’s exports to the world. The very first pub we went to was apparently ‘Bath’s smallest pub’. They weren’t exaggerating. It was tiny. But if you can measure a place by its character, it was huge. A bit like the TARDIS, I suppose. While it might be a shame that I don’t remember any of the ales we had that evening, I suppose it is a testament to their potency.

I do remember we had one called the Black Rat – unless that was the night before in Gloucester, at Rene’s. If my memory is that affected, then the score is Bath Breweries 1, Vahishta 0.  After the close confines of Bath’s smallest pub, we decided to amble on (I was a bit unsteady on my feet, having not yet mastered the knack of getting used to pints) and we stopped at three other pubs and then made our way to the station. This is when I had my first taste of adventure at the hands of the British railway system. There’d been a combination of delays, which resulted in us missing our connection at Bristol. (Perhaps an untimely visit to the toilet may have had something to do with it as well).

Anyway, there we were, stuck in Bristol, my brother and I – hungry, tired and waiting for a train that would now come after an hour. Instead of staying in the station where it was warm, we went foraging. Pubs in England stop serving food at about 9 and it was already half past ten by this time, so we made a dinner of some pizza at an extremely swanky Bristol restaurant. I think we made quite an appearance, surrounded by elegant diners in suits. Still, to their credit the waiters treated our money just the same as everyone else’s.

Finally, tired and (less) hungry, we managed to make our train home and brought the day to a close.

Here are some pictures I shot in Bath: