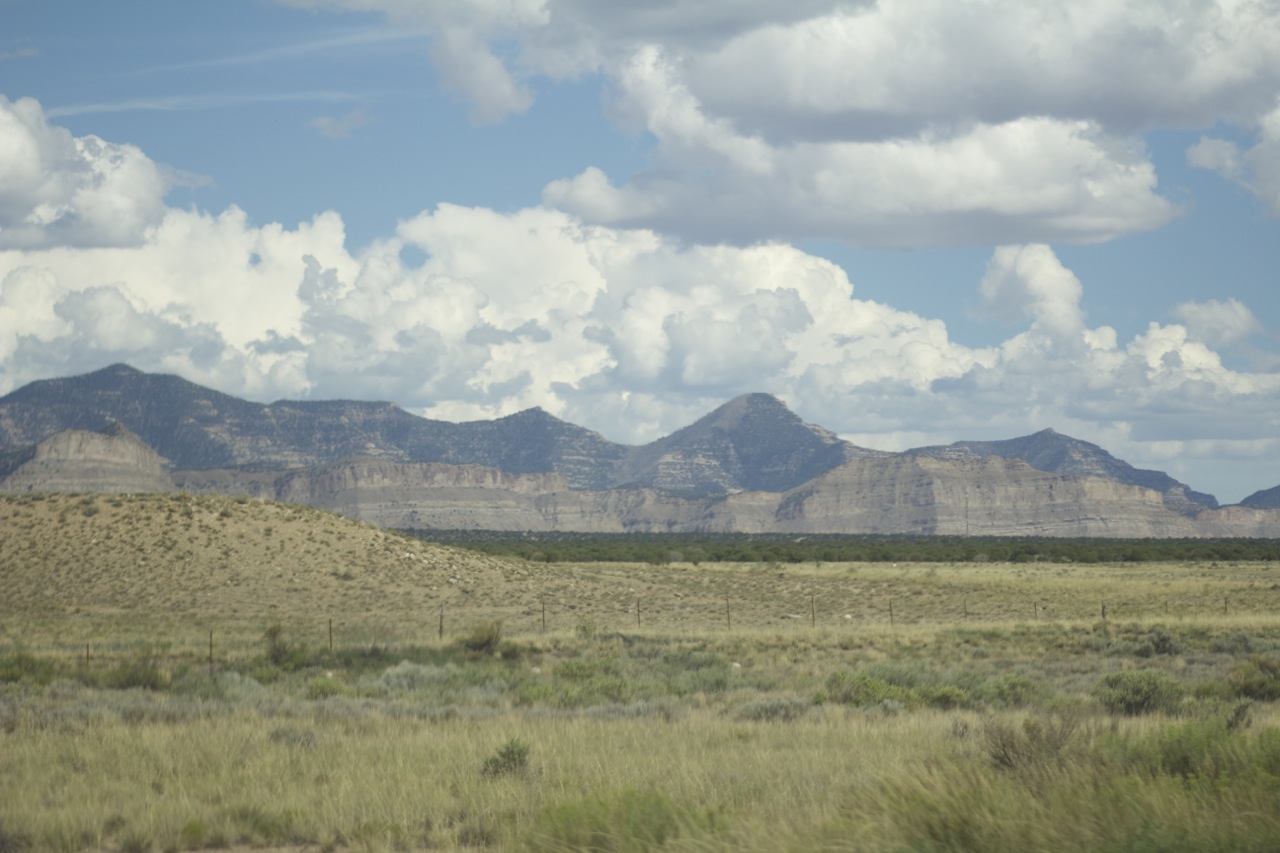 This is the last of a four part series of posts about traveling by Greyhound. Please start from the beginning, if you haven’t already!

In a Greyhound bus, you have the choice of a window or an aisle. The aisle is warmer, easier to sleep in and has access to the toilet. But for the trip into Denver, I knew I wanted the window.

I had been treated to an unchanging, unceasing expanse of cornfields and flat land for more than 12 hours. No water bodies in sight, nothing to break up the expanse of yellow, ripening crop. At times like this I don’t wonder that the mind plays tricks upon oneself, inventing patterns where none truly exist. A curious side effect of the multiple delays that I had experienced on the road meant that instead of going over the border between Kansas and Colorado at night, I would be traveling across the border at daytime, and reaching Denver by early afternoon. This is important because after all those flat cornfields, we were going to finally see some mountains!

We were tooling along Interstate 70 West, heading slowly towards our destination when the first hint that things were changing appeared. Clouds. Huge, monstrous leviathans, appeared on the horizon. These first guardians of the mountains were as big as their charges, and they served to humble us with their appearance.

The mountains themselves were still hidden below the horizon – we could only see the unbroken expanse of sky reaching up and getting swallowed into the stark white fluffy clouds.

Battleships and fortresses in the sky, they seemed. There wasn’t a single person who remained unaffected. David lived in Wyoming and must have passed through this route many times, but he too turned to me and gave me a grinning, excited thumbs up. “The mountains!” We all thought as one.

As we rolled slowly, ever so slowly closer, we began to truly appreciate the size of the clouds. Thankfully, at a convenient meal stop, we were able to get off the bus and stare off into the horizon. The clouds by now dominated a whole third of the sky and the mountains were a low purple slash below them. Deep in the distance, lightning flashed.

The terrain soon grew rocky and our road was a straight beam plunging into a land that was caught in a frozen wave. All around us massive boulders and crags began to appear as we gained altitude. A mile up, the land flattened out and we were there. Denver, Colorado. 1 straight mile above sea level. We’d missed our connection (again) so I had to wait for my bus. This was also where I bid farewell to David, who was going to get a ride from a friend. I had 11 more hours to go, on a last bus through Wyoming and into Utah for the final leg of my journey.

This bus ride was the most excruciating and the most exhilarating as well as the most enlightening yet. It was an older bus, no wifi, no electric outlets to charge our devices. I had about 25% left of my battery on my phone and then it would leave me with no forms of distraction whatsoever. As I waited in my seat for the bus to fill up, I wondered who my new and last companion would be. One of the last people to get on was a man in a dark green military style jacket and jeans, carrying a bag in desert digital camouflage pattern.

He sat next to me, and that’s how I met one of the most interesting people I have ever known. David Gee (yes, I had exchanged one David for another) was an ex scout sniper, a ranger, a trapper, a mountain man, a recovering drug addict, was homeless until recently, had been in jail and was a genuinely nice guy. He was living proof that there is no way to judge someone based on the things that they do or that have happened to them. We started talking as the bus left Denver and his open, polite manner immediately warmed me to him.

He shared his meager food with me and I did the same when we stopped at a meal junction. One of the first things he did, in fact, was offer me a pair of new socks. “You gotta take care of your feet, man.”

At first I found this strange but the background to it is quite sweet. When he found that he could finally leave Albuquerque, New Mexico and return to his home with his mother in the mountains of Wyoming, he bought all his homeless ‘brothers’ new socks. This was the last pair and he wanted to give it to a fellow traveler. I wish I had accepted them, now.

David was a wealth of knowledge about the land we were passing through. Wyoming is a stunning place, mountainous and rough, with lots and lots of wildlife. We saw perhaps 200 antelope, down in the foothills of the mountain, where they came to breed. He could judge the elevation from the flora and fauna, to within a few feet (I checked, as long as my phone worked) and he taught me many things about living in the wild, some of which I actually managed to put into practice.

The night was bitterly cold as our old and draughty bus wheezed its way north and then west, approaching Salt Lake City through Wyoming. David left at Evanston, Wyoming and I was alone for the last few hours. My mind was at peace as I went through the experiences of the last four days.

The journey had changed me. I had been through ups and downs, crests and troughs, emotionally, mentally, physically. I reached Salt Lake City and went through the rigmarole of de-boarding the bus, in the early morning light. My next stop was going to be the south of Utah, but this time in a comfortable car, not a bus. I still missed all my traveling companions. As I met Sam and Adrien, my traveling companions for the next few days, I couldn’t help but look back and remember all the wonderful people who shared the road and their lives with me. Andhi, Carol, John the trucker, the two Davids, the football fans, the Mexican kid going north to Canada through Boise, Idaho. The faux redneck man who we all suspected smoked on the bus and caused our driver to nearly throw him out. All of them. They were a part of an intense and short lived experience and no matter how many times I ride the ‘hound, although I will have newer and perhaps equally exciting experiences, I will never have the like again.