I’m typing this out in the dining hall of the Surya Hotel, in Bir, Himachal Pradesh. On the map, below, you’ll see that it’s just at the foot of the himalayas. I can see, in the distance, some low mountains capped with late snowfall. More evidence of climate change, I suppose. The climate isn’t all that’s changing here, though. Bir has long been a popular destination for tourists, especially adventure sports nuts. Paragliders who take off from nearby Billing land at a site in Bir and take a taxi back up to the take-off point. The increased revenue from the tourists is evident. The number of laundries and hotels have increased, and the garishness of the shops seems to have gone up. While this is true of all of Himachal Pradesh, I find it most evident here. 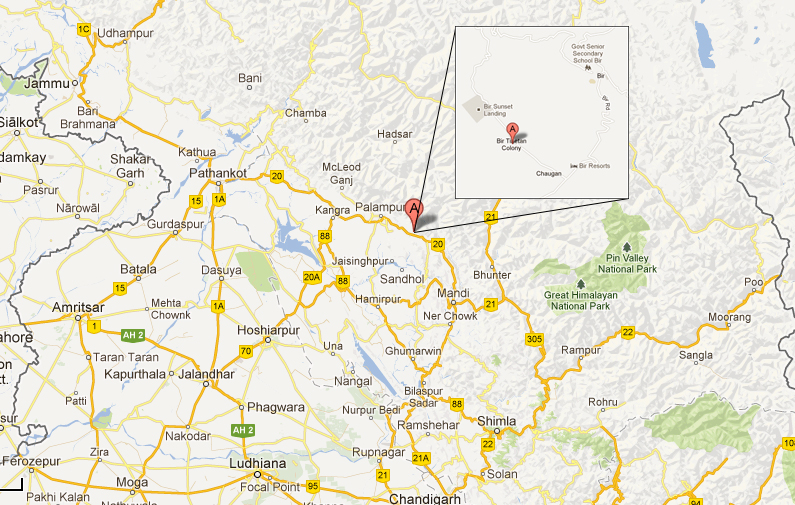 The people are cheerful and welcoming. I haven’t seen a frown on anyone’s face yet, except for one tourist, a woman who was unlucky enough to not get a room anywhere in Bir. The other reason Bir is on the map is spiritual. It’s a home to the Nyingma monastery and the Deer Park Institute for Study of Classical Indian Wisdom Traditions.

While I am not particularly interested in the spiritual aspects of the region (although I will be attending one session of teaching at the Deer Park) I have to say that the many Tibetans walking about, and the noodle shops and prayer flagsÂ Â lend a very peaceful atmosphere to the whole place. It isn’t all crass commercialism and trance music like Goa, for sure.

I suppose Bir is the right place to make a start when you’re traveling to Himachal Pradesh. It isn’t very high up, so you won’t be fighting altitude sickness. It’s an easy six hour drive from Chandigarh airport (seven if you stop for lunch and tea, like I did) and it’s a great place to just rest for a couple nights before you move on to the more energetic things on your trip.

In the next couple of days I will be visiting Dharamsala, McLeod Gunge (or Ganj if you like the more modern spelling) and I will be taking a few hikes in the Bir / Billing area. There will be many more posts to come!