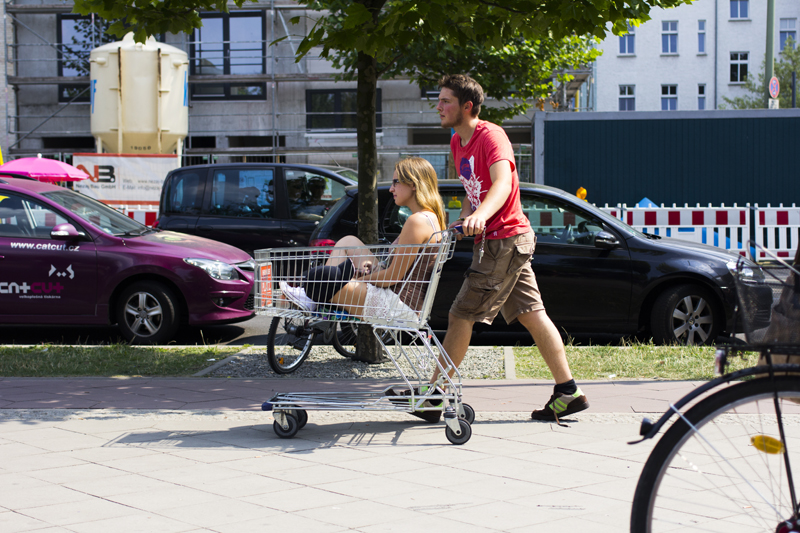 When other countries talk about ‘exporting freedom’ to dictatorships, I always wonder what their template for freedom is. If it were up to me, I’d want my version of ‘living in a free state’ to be as much like living in Berlin as possible. Of course, that’s as much of an anathema to the people who want to overthrow dictatorships as the dictatorships themselves.

But enough about politics. I am sitting in a darkened flat in Neukolln, which is considered to be one of the cheapest places to stay in Berlin. Outside, the slow summer sunset is about two thirds of its way through its life, the sky darkening to a deep puce but there’s still enough light in it to read comfortably. I’ve been vegetating on the couch all day, ensconced in a book. I should feel guilty at wasting a whole day. It’s one of the precious 75 that I’ve been graciously allotted by the German government. Every time I think about this trip I can’t help but see a countdown in my head, numbers ticking over – days, hours, minutes, seconds, all irretrievably slipping away, sounding the death knell to my travel in Europe. It almost makes me want to get up and run out of the flat and see as much as I can, but the only thing stopping me from doing that is the knowledge that such an approach to travel can bring only sorrow.

It took me about three months while traveling in the US last year, to learn the bitter lesson that no matter how efficiently I plan my journeys, there’s no way I can see everything there is to see. The answer is to go as slow as possible and to take these lazy days off, as many as I can afford, striving always to remain in that zone where my lethargy and my drive to see things are in balance with each other. There is some solace to the fact that I haven’t been entirely slothful this trip. My first day here began with a detailed walkthrough of the Berlin public transport system, courtesy my host Sebastian, who explained how the intimidating Berlin subway, with its multiple underground (U-Bahn) and above-ground (S-Bahn) metros, regional trains, trams and ferries all interlocked and granted you complete access to the whole city. In fact, from any point, you’re at best just 200m away from some form of public transport. It’s a wonder that taxis are still used!

I’ve been spending most of my time close to home, though, in the suburb of Kreuzberg. A very grungy, artist-colonized district in the former East Berlin, its now beginning to get gentrified but still retains its bars, street art and its love for the alternative. In the few weeks I’ve been here, I’ve had some of the best food, the best beer and the best times of my life.

Highlights have included visiting an underground bar where all the furniture was bolted to the ceiling, to attend an open mic night – which was terrible for the most part, except for the Brazilian guy who sang a song about assholes who use their phones to record concerts instead of just watching the concert. Oh and the Italian guy who played the piano at the end was pretty good, too.

Then there are the all-night off-license shops, or Spatkaufs – what a concept. Basically you can go into one, buy anything from condoms to beer (that’s a fun night!) and walk right out. And none of that pussyfooting around with brown paper bags either, my American friends – these Europeans are allowed to drink their beers wherever they want – even on the subway! (See what I mean about freedom?)

Speaking of beer, there’s a huge variety, as was expected. My favorites so far are Flensburger Pils, Berliner Kindl (which I think gave me the trots but I don’t care because yum) and a whole variety of smaller craft beers that I’ve been imbibing regularly.

The one thing that really shocked me as well, was the ability to smoke on the platforms at U-bahn stations. Of all the cities in all the world, even Indian cities, I’ve never seen people do that – but in Berlin, all things are possible. It isn’t that the society has degenerated into utter anarchist chaos either. Everywhere, under the surface, you see that orderly German vibe, but the chaos is a light creamy layer on top.

The other reason I love Berlin so much is the history of the place – from the last days of the second world war, to the slow simmering drama of the cold war, Berlin has been the focal point of the world for a long while. And all of that history is palpable, in the streets – even the rebuilt ones. Take for instance the many museums and monuments around the city – you get a distinct vibe from the West and East side. The monuments to the Soviets are huge hulks, such as the 12-foot Russian soldier holding a sword and cradling a child on top of a broken swastika, at Treptower park. Or the gigantic Soviet soldier looking down at bemused passersby at the Tiergarten. Then you have the wall. The last remnants are still visible, at the Wall memorial on BernauerÂ StraÃŸe, and there’s the Mauerpark close by, which also has some wall memorabilia visible – but which is now, on Sundays, a huge flea market.

It’s quite easy to get very depressed if you’re on a tour of the GDR’s doings, so its a good idea to space these out. Doing a bunch of significant locations on an afternoon leaves you pretty much in the mood for a beer and a quiet contemplative corner – which isn’t a bad ting, just don’t overdo it.

Berlin is apparently also the city with the most parks and open ground per square mile, including Tempelhof park, which is actually the old Tempelhof airport, now converted into an open space for Berliners to hang out and be cool, which sort of comes naturally to them. (When I saw it for the first time, I could just think one thing: “So much room for activities!”)

Speaking of activities, it is now time for me to head out and see the sights of the day: a Turkish market and then, in the evening, the Lady Festival: A feminist festival in Berlin at the Tempelhof field. Well, its either that or visiting a ‘left-culture festival’ which claims to be 100% DIY, 100% anti-fascist, 100% anti-commercial. Um, that’s good, right?

If I survive, I’ll post an update soon about Tomorrowland! In the meantime, check out some pictures of Berlin: